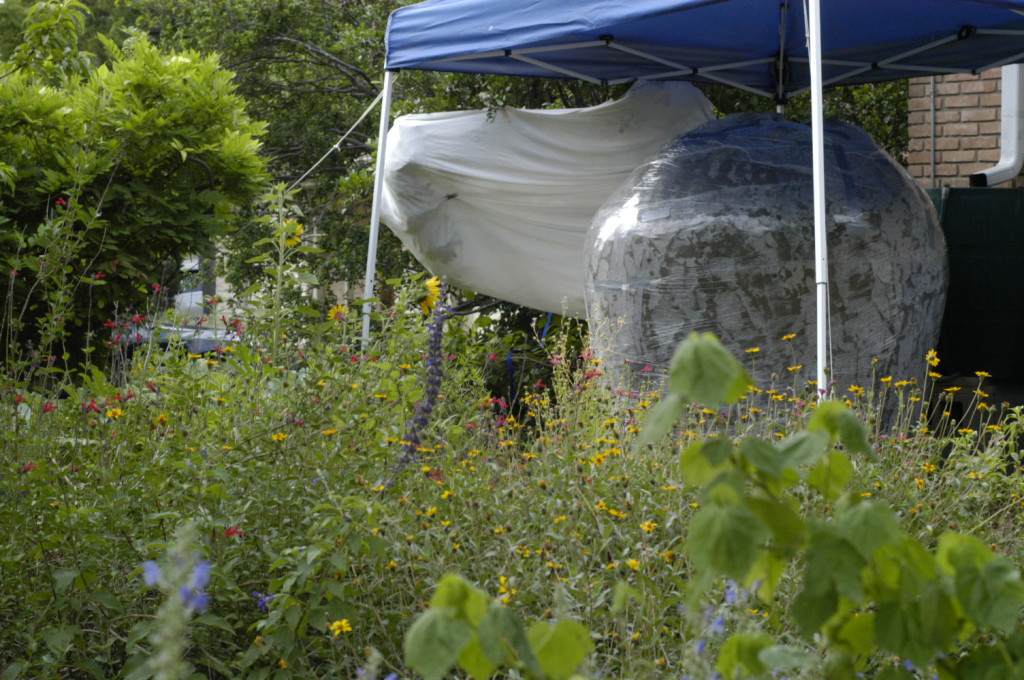 Like a 1960s housewife at 4:30 pm, she is folded, this morning, in layers of Saran wrap. Beads of water from the concrete plaster have condensed under plastic to give her a glisteny sheen. She’s plump and a little irregular, reflecting the pats, the strokes, in some cases the punches and kicks of the 14 people who worked together last Saturday to craft her. She is my Thai rain jar.

Lisa and I have 2,000 gallons of water storage on our small Zilker neighborhood lot in a hodge-podge of containers: three city-issued green plastic barrels, eight 55-gallon drums salvaged from behind the dumpster at H2O Car Wash, and an aluminum watering trough. We have one pond lined with fancy ethylene propylene diene monomer (EPDM) rubber; and another larger pond lined with pieces cut from a salvaged vinyl swimming pool. But the rain storage we love most is our ferrocement tank.

Our 5-foot diameter, 8-foot high, hand-built ferrocement tank is a bulldog. When topped up by a recent rain, it has enough pressure to water the garden with a hose in a few minutes, compared to the slow flow of water from the lower tanks. Bonus: the mass of concrete and water at the edge of our patio makes a cool, shady nook through Austin’s brutal summer.

We built this bulldog 6 years ago, patiently slathering 5 layers of cement around the armature of welded mesh and chicken wire. The raw materials were less than $400, compared to a plastic tank of the same size for about $700. A ferrocement jar half the size of the one we are building can be purchased online for more than $2,000 plus $150 for shipping. The cost is time and arm muscles to lift layer after layer of cement onto the armature. If anything in our modern, water-short central Texas lives calls for a community barn-raising, it would be building ferrocement rain catch.

That’s what we began on Saturday. Design~Build~Live organized and publicized the workshop. Dani Slaibaugh from Yards-To-Gardens showed up with 35 bags of cement, a trailer full of sand, those little plumbing bits, an 850-gallon muslin sack, and the experience of building eight previous jars. Art Ludwig provided the basic design in his book Water Storage. Lisa and I ordered three cubic yards of Texas Native hardwood mulch dumped by Natural Gardener at the end of the driveway, tied back the mountain laurel. We provided cool peppermint-lavender tea, icy watermelon, or vegan Oreo cookies, as needed. 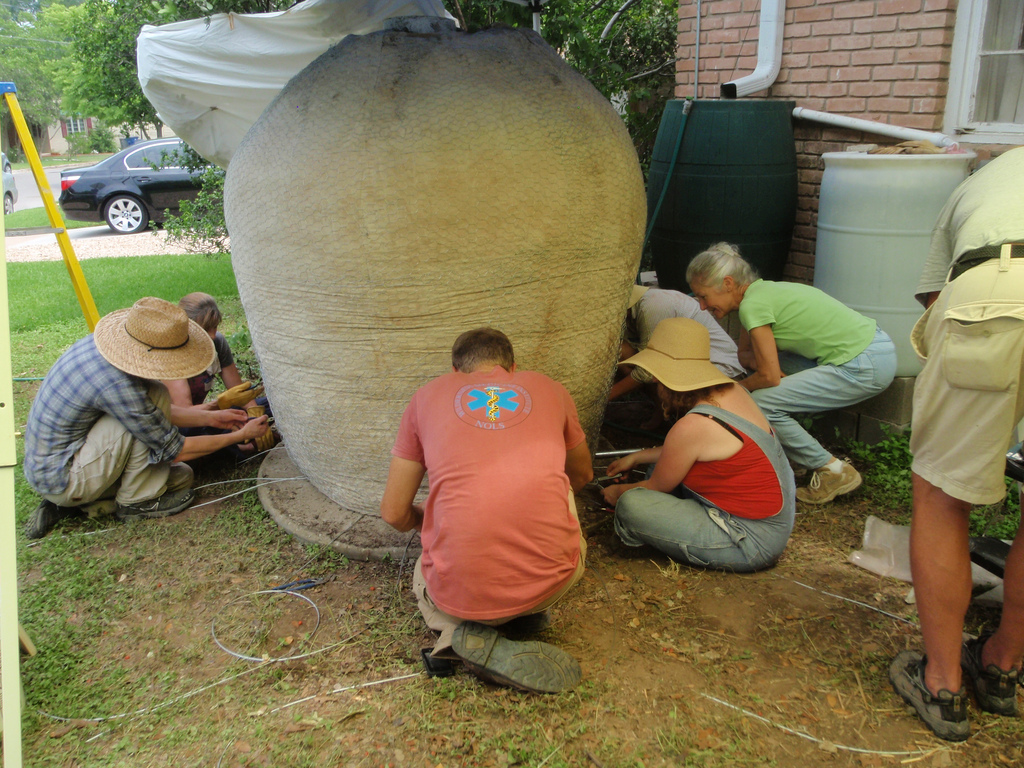 Workshop participants came from Waco, Rockdale, Blanco, and from all over Austin. We were farmers, engineers, writers, swimming pool experts, real estate agents, jewelers, and teachers. Some of us acres of experience slathering plaster, and for others it was our first. As space, opportunity, energy and interest waxed and waned, we moved between the concrete pad, the mulch pile, the growing tank shape, and chairs set out in the driveway under the shade of a live oak.

Our first step was to lay an octopus of airplane cable in the middle of the 12-inch thick concrete pad that had been poured the night before. Chicken wire was placed onto of the cable and the aluminum pipe outlet, elbow, and hose bib assembly tucked beneath the wires. A dusty muslin sack was centered over the pad and cables and the fire-brigade of mulch in buckets began. A cluster of mulch-filled buckets formed the core of each layer. Loose mulch was poured around and between the buckets and then shoved, pounded, and kicked into a sturdy form. Wood was laid across the topic of the buckets and the process repeated to create another layer. After the final handfuls of mulch were shoved below the lip of the to-be tank, the canvas was wrapped in chicken wire and steel cable.

After a restful and delicious vegan lunch, we mixed the concrete plaster: three parts sand to one part Portland cement, water to the proper consistency. By 4:30 the muslin bag and all of the wires were hidden beneath the gray plaster. Participants took their leave. Ken McKenzie from Design-Build-Live, Dani, Lisa and I plastered on the second layer, wrapped the plastic around the shape, washed the tools, and tucked everything under a tarp until the next step.